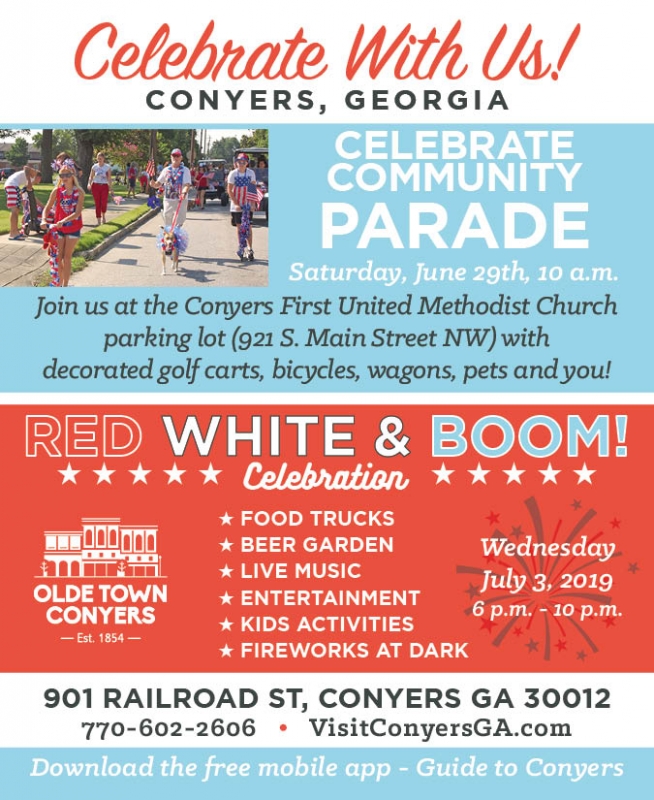 Residents are encouraged to gather in the church parking lot as early as 9:30 a.m. for the walking parade that will feature decorated wagons, bicycles, and golf carts. Those participating in the parade or spectating along the half mile route through the historic residential district of Olde Town Conyers are encouraged to wear red, white and blue or patriotic attire. Prizes will be awarded at the parade’s conclusion in several categories.

"The Celebrate Community Parade has grown in popularity over the past two years and we’re excited to see the response this year," said Olde Town Event Coordinator Sandy Daniels. "The enthusiasm of the participants and spectators along the route is electric and we’re excited that this year’s parade will be the precursor to fireworks returning to Olde Town the following week on July 3 at the Red, White and Boom event."

Streets impacted by closures due to the parade will be North Main Street, College Avenue, Park Circle and a portion of Rosser Street. No motorized vehicles will be allowed in the parade and no vendors will be permitted in the parade staging area. There is no cost to participate in the parade.

For more information on the parade on June 29 and Red, White and Boom on July 3, contact the Conyers Welcome Center at 770-602-2606 or visit www.conyersga.com.